More than just a breath of fresh air, this spring? 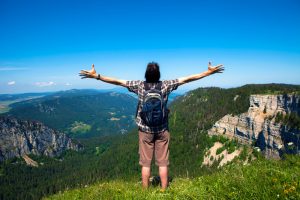 It was Thoreau who wrote, “We need the tonic of the wilderness……we can never have enough of nature.” I must say, I agree with him: if only we could bottle the benefits of the countryside!

Evidence is mounting, as many of us who are lucky enough to know already, that being by the sea or in the country, is good for our health. The question is, why?

Some of the restorative powers of this ‘blue-green’ space could be psychological. In the 1980s, the biophilia hypothesis was put forward by biologist, E.O. Wilson, who said that we have a hardwired need to connect with nature. A study at the time found that by just looking out of a window on to a natural scene helped patients recover more quickly from surgery that those whose view was that of a brick wall.

More recently, a UK study showed that people who live in coastal locations take significantly more exercise that those living inland. In addition, a Japanese study, on the physiological effects of shinrin-yoku (literally meaning, forest-bathing!), found that participants had lower blood pressure and lower levels of the stress hormone, cortisol, when they took country walks, than when they walked city streets.

Blue-green space has been found to improve the regulation of our immune system. This is because it exposes us to the bacteria and parasites with which we co-evolved. Another way of looking at it could be that the country and sea air is good for us simply because it’s slightly poisonous!

Take a stroll by the ocean or in the woods, and you can smell the difference compared to a town or city. It’s more than just a lack of pollution – what you’re smelling is an airborne plethora of particles and chemicals produced by plants, fungi and bacteria.

Wave action produces microscopic droplets of seawater, bringing with them compounds from marine bacteria, algae and seaweed. The presence of these biomolecules in the atmosphere represents a radical departure from the urban environment, the latter being more likely to contain synthetic pollutants and mildew. Breathing in and ingesting natural chemicals may actually have a positive effect on our physiology. They may even block the progression of many diseases, such as diabetes and cancer, as well as certain neurodegenerative processes.

During the course of human evolution, our ancestors were exposed to a legion of phytochemicals, through inhalation and diet. Though many of these are toxic in high concentrations, this long-standing exposure has made us tolerant to low doses. In fact, exposure like this is of real benefit due to the mild stress induced in the body, so triggering our repair mechanisms, enhancing tolerance to bigger doses.

Planners are putting increasing emphasis on creating urban parks as more and more people move to the city from the country. If it turns out that airborne, natural molecules do indeed boost our health, then it leads to the question: “Could we bottle the benefits of the countryside!?!” Surely, natural phytochemicals could be added to aerosols for use in the home and in public places, such shopping malls. Could they even be added to our diet?

City air is not only more polluted, it lacks the diversity of biologically derived molecules that humans have been exposed to throughout our evolutionary history. Considering this, any health benefits we experience in the natural environment must surely be regarded as not just a boost to our wellbeing, but a basic return to our survival. It seems that when we venture out to “take in the air”, we’re probably getting a great deal more besides!