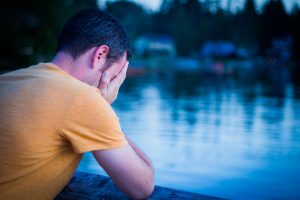 Life, it is sometimes said, begins at 40, but it often doesn’t feel like it!

To many people, the realisation that youth is behind them and middle age has arrived, is a depressing one. We are used to dismissing our fifth and sixth decades as a negative chapter in our lives, which is perhaps cause enough for a crisis! But it really shouldn’t be seen that way. Recent scientific findings have shown just how important middle age is for every one of us, and how crucial it has been to the success of our species. Middle age is not just about starting our descent down to the other side of the hill towards the inevitable. It is an ancient, pivotal episode in the human lifespan, pre-programmed into us by natural selection – an exceptional characteristic of an exceptional species!

Compared to other animals, humans have a very unusual pattern to their lives. We take a long time to grow up, we are long lived and most of us stop reproducing halfway through our lifespan. A few other species have similar elements to their lifespan, but only humans have distorted the course of their lives in such a dramatic way. We have at least two healthy decades after our babies stop appearing – two decades that our cousins in the animal kingdom simply do not get!

An important clue that middle age is not just the start of a downward spiral is that it does not bear the hallmarks of a general, passive decline. Most body systems deteriorate very little during this stage of life. For example, our ability to focus on nearby objects declines in a predictable way – long sightedness is rare at 35, but universal by age 50. Skin elasticity also decreases reliably and often surprisingly abruptly in early middle age. Patterns of fat deposition also change in stereotyped ways. Other systems, though, notably cognition, barely change.

All these changes can be explained in evolutionary terms. We are more in need of beautiful, mate-attracting skin and spectacular vision, plus fitter bodies, while we’re younger rearing our own young, but our brains are needed well into our dotage!

One of the most enduring concepts related to middle age is the midlife crisis. Usually, associated with men in their early 40s, and often said to include a psychological crisis of self-worth, a tendency to seek out the romantic attentions of much younger partners, plus a return to high-risk pursuits, this may not be a real phenomenon at all!

None of these elements stand up to scrutiny. Men in their 40s are no more likely to claim they are experiencing a crisis than men, or women for that matter, in their 30s or 50s! ….and many researchers now believe that the entire concept of the midlife crisis should be consigned to the dustbin!

Crisis? What crisis?! Every age has infinite possibilities and Mother Nature, as fickle as she is, knows exactly what she is doing!