Held captive by our brains? 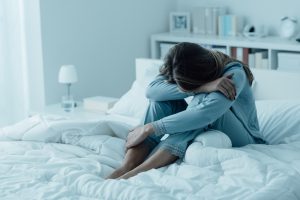 We’re all too familiar with the lethargy and low mood that can sweep over us when sickness strikes, driving us to curl up under the duvet. Believe it or not, these are the effects of inflammation in the body, its first line of defence in response to injury or infection.

This inflammatory response, which is designed to keep us safe when we get sick, might lie behind some cases of depression. The link between depression and inflammation is not new. People who have diabetes or rheumatoid arthritis are known to have elevated baseline levels of inflammation and are at a higher risk of depression. A significant number of people in this group find themselves not responding to standard drugs due to the inflammation.

If our immune system is constantly firing signals, the brain keeps us feeling miserable. Since most people are exposed to all kinds of everyday stressors, why should this cause depression in only some of us and not others?

People can have high baseline levels for several reasons: their genes might predispose them to an over sensitive response, of perhaps something happened during their early development to ramp this up. We know that childhood trauma, such as physical or mental abuse, can increase the risk of both physical and mental illness later in life, including depression, anxiety and post-traumatic stress disorder. The mechanism involved is still poorly understood, but many psychiatrists believe that trauma experienced when a child’s mind and body are still developing can hard-wire the immune system to run high for a lifetime, presumably as an adaptation for living in such real or perceived danger.

Those neglected or abused as children tended to have higher levels of inflammation than those experiencing a relatively stress-free childhood. Inflammation may play a role even earlier. I have always believed that most things can be traced to as far back as the womb. Studies have shown that babies born to women who had high levels of inflammation during pregnancy tended to have weaker connections in the brain which might predispose these children to mental health issues later on in life. Inflammation is now also thought to play an important role in Alzheimer’s disease, with attempts to treat schizophrenia and depression underway, but currently only producing mixed results.

Suddenly, this brings depression into the context of a medical disorder, which could even help overcome the stigma and discrimination that is thought to deter many with depression to seek treatment. Who knows? Let’s not hold ourselves captive as prisoners of the brain any longer……the body’s immune system is designed to make us hide away when we are ill – if this is what’s causing depression in some of us, then let’s throw off the shackles, start working on ways to get round it and escape the demon once and for all!