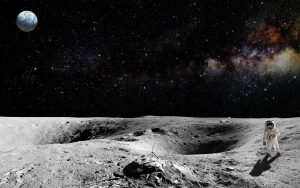 It’s December 1968, and the US have just successfully sent a manned mission, Apollo 8, into lunar orbit. Closely watched by people all over the world, it simply whetted our appetites for more!

The following year, on the 16th July 1969, Apollo 11 blasted off from Kennedy Space Centre in Florida. Aboard, the three astronauts, Buzz Aldrin, Neil Armstrong, and Mike Collins, accompanied the craft for one and half orbits of the Earth and then on through its journey to the moon.

On the 20th July, as a little girl, just 7 years of age, I remember this as if it were yesterday……waiting close by my dad as the sitting room filled up with family and friends, descending on the house, all determined to get a seat around that small black & white telly to see the inaugural moon landing!!!

I even remember seeing Alastair Burnett’s face as the journalist reporting on events – of course, I didn’t know it was Alastair Burnett at the time – it was only when, many years later, I saw him as one of the broadcasters on ITV’s News at Ten, that I recognised him and who he was! Funny, how certain things stick in your mind??

Anyway, as an estimated 500 million people around the world watched in amazement, the module landed successfully on the moon and Neil Armstrong uttered those immortal words: “The Eagle has landed”, followed by his taking that first step onto the powdery surface of the moon, and uttering possibly the most famous quote of the 20th century: “One small step for man, one giant leap for mankind”.

My heart soars, even now, when I think of this and what the human race has achieved!!

Quite a strange little girl, wasn’t I? Star Trek mad and astronomy addicted (I still am!?!) …. but then, it’s no surprise this monumental event made such an impression on me …. all I wanted to do was to grow up to be an astronaut, or, failing that, travel the world as a pilot!

However, apart from making a simulated flight from Manchester to Vegas in 2015 and visiting Cape Canaveral in 2013, it’s been a long old wait, and other than requesting to have my ashes blasted into outer space, this is one ambition I’m going to have to forego! Boo-hoo-hoo!!

Highly unlikely for me at this age, but absolutely possible for me to live this one out vicariously through my 11-year old nephew!! Time to educate the next generation on what’s possible, me thinks!!

Live Long & Prosper and here’s to the launch of a new space programme to give our kids some much-needed and renewed hope for the future!!